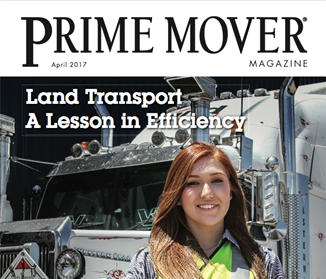 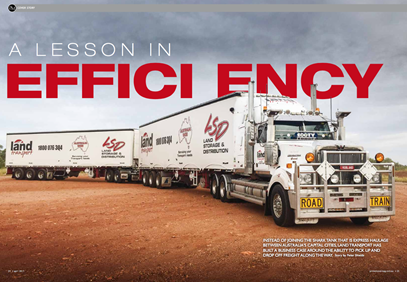 Barry Land is well aware that some in the industry could find his approach to doing business a little “old school”, as he likes to put it, “but it’s working well for us and gives us an edge over the competition, which still doesn’t seem to be able to replicate what we do.”

Together with his wife Raewyn, Barry founded Land Transport in 1984 as a general freight service with a twist – the ability to pick up and drop off a consignment where most line-haul services would not bother stopping. “As long as there’s money in it and it’s legal, we’ll do it,” he says – revealing that the key to Land’s ongoing success lies in upholding a high equipment-utilisation ratio.

To do so, Barry and Raewyn set up a tight-knit network of regional depots that are in constant contact with each other to consolidate freight wherever possible – regardless of the resulting route. “As an example, we may send a truck from Brisbane to Moree (a town in western NSW, ed.), take a whole load off there and replace it with a different full load that we’ll distribute to Wagga Wagga and Shepparton before finishing in Melbourne,” explains Debby Carrier, whose official title may read Secretary to Barry Land, but who has been in charge of the company’s entire Toowoomba head office ever since Barry scaled back his day- to-day involvement.

“Our network of depots plays an important role in making it all happen. If Sydney, Dubbo or Wagga have a small consignment of just a couple of pallets for Brisbane, for instance, they’ll send them to Moree to become part of a bigger load. That ability to connect the dots is our core strength.”

Although it is supported by modern technology, Debby says much of the consigning is still done by hand, with the administration staff playing a vital role in keeping the business running at peak efficiency. She explains each team member is trained on the job and expected to enter into an “ongoing, positive dialogue” spanning all divisions from accounts to operations – ensuring a degree of flexibility and understanding that has yet to be replicated electronically.

“A component of the induction process for administrative staff is being physically taken into the yard and being made aware of practical information such as the difference between a B-double and a road train,” she says – indicating a positive and cooperative attitude is vital to ensure each of the 180 staff is able to perform at their best.

Drivers are especially taken care of at Land Transport. In a move to ensure all they have to focus on is the actual driving function, they are given full instructions at the beginning of each trip, with all necessary paperwork in separate envelopes indicating what they should be delivering and what they should be picking up. Staff are arranged to be on site at each depot to load and unload at any time, even after hours, so the drivers are left undisturbed by management contacting them about estimated arrival times. “We religiously load to and from Perth and Toowoomba every Friday, but we certainly don’t put any pressure on our drivers,”

Debby says. “Barry’s aim has always been to let them do their job professionally and not be hassled by anyone. The system works so well that we hardly ever have to call a driver to check on them.”

The same is true for compliance and Chain of Responsibility (CoR) related issues, says Compliance Manager, Sammi Brock – especially now that Land Transport is increasingly involved in the transport of Dangerous Goods such as agricultural chemicals. “Compliance has changed a lot over the years,” she explains. “First the depots were accredited, then the individuals, then both, then just the depots and now it’s both again. We’re keeping an eye on all that to ensure the drivers have peace of mind.” 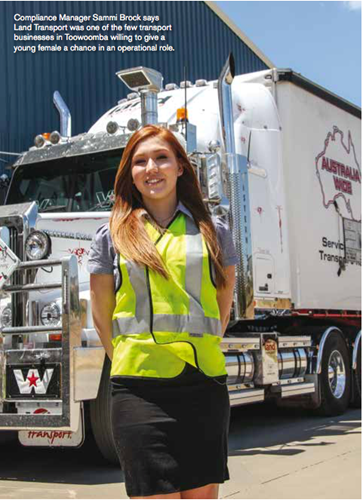 As a female Gen-Y representative who made a name for herself by introducing web-based training for depot staff to keep up with CoR changes, Sammi says Land Transport made it easy to get a foot in the door of a traditionally male-dominated industry: “After school I had to choose between making coffee for a few more years or building a career for myself. Some transport businesses looked the other way when they were approached by a young girl wanting to get into the industry, but Land has been awesome. It’s a very dynamic company that provides us with real growth opportunities, regardless of gender or age.”

Sammi set up each truck with a so-called ‘blue box’ which contains all appropriate permits and gazettes to ensure access along the chosen route. Because some drivers can spend weeks away from their home depot, she also created a system where any updates are forwarded to the depot the truck will be at next – safeguarding that vital paperwork is always current.  Sammi says next to AgSafe accreditation, Barry Land is well aware that some in the industry could find his approach to doing business a little “old school”, as he likes to put it, “but it’s working well for us and gives us an edge over the competition, which still doesn’t seem to be able to replicate what we do.”

Land Transport has both NHVAS and TruckSafe accreditations for fatigue and maintenance management. The drivers are not pressed to drive extensive hours and work to expected delivery dates rather than hourly deadlines, so the Basic Fatigue Management modules suffice. Most of the in-house maintenance operation has been relocated from Toowoomba to a facility at the company’s new Brisbane depot, she adds. With a keen eye on compliance and a proven, albeit ‘old school’ consignment system in place, Barry says Land Transport hasn’t suffered too much from the industry’s transition away from mining work and towards a more service-based business model. “I’ve never been big on mining-related work, mainly because of the time sometimes taken to get unloaded and get out of there,” says Barry. “We still do a bit of it, but with a customer base of 8,000 businesses, we never have to put all our eggs in one basket, which helped us get through the recent readjustment relatively unscathed.”

Recent customer demand has seen Land Transport expand its refrigerated division, Barry continues, with two refrigerated B-double sets and four single chiller trailers having just joined the fleet. “We carry a lot of canola seed now, which is flown in from Chile due to a local shortage,” he explains. “Canola seed requires to be transported at a constant 15°C.”

Because it is genetically modified, Barry adds the product cannot be transported through South Australia, adding some 2,100km to the trip between Toowoomba and the growers in Western Australia, who rely upon the delivery of their seed in time for the planting season.

With that in mind, Debby says it is important to provide the drivers with a good work environment, starting with basics such as suspension seats. “Comfort is a personal thing and it should be no different for a driver than the team in the office,” she explains. “We aim to look after our drivers and give them a healthy work- life balance. If, for example, a driver prefers a particular run, we try to keep them on it.” The result is a work environment where traditional values like loyalty and friendship are still held in high regard, she says. “The guys have what I jokingly call the transfusion – they remove the blood and pump diesel in. I think that’s the case for all of us, actually. Call it old school, but if you don’t get ‘it’ within a few months, whatever department you work in, don’t waste your time. It doesn’t matter if you’re male or female or where you come from, it’s that special feeling that connects us all.” 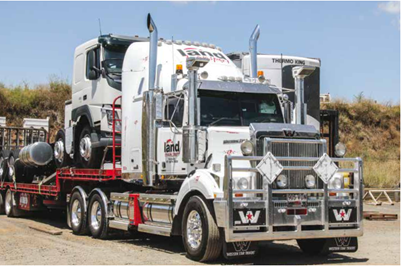